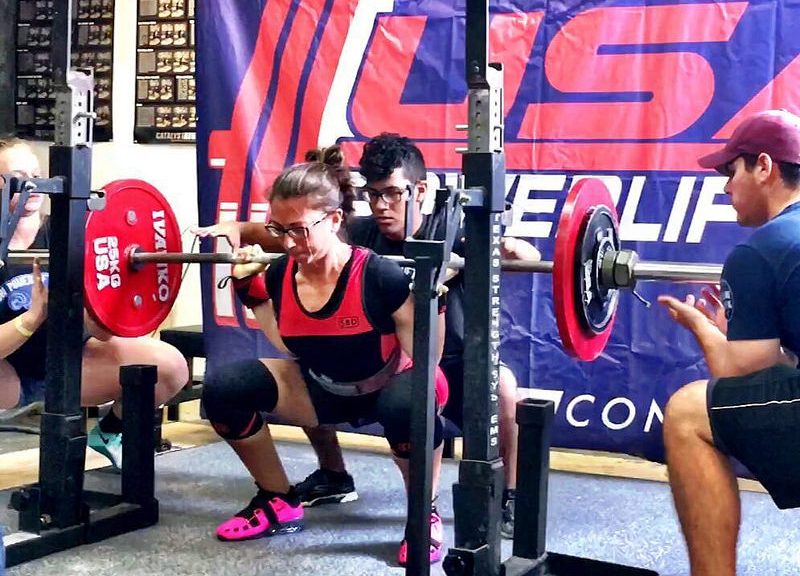 It’s taken me AGES to write this recap, but I’ve been inspired by #usapl Raw Nationals this weekend to finally get my act together!

This past July, I competed in my first USAPL powerlifting competition. My only previous comp was the first official full powerlifting meet here in Bangkok, so I was super excited to see how a well-established competition would run. It was awesome!

Here are my highlights:

One of my big goals for this competition was to compete in a lighter weight class. I realized at my first comp in January that my weight had begun to creep up a bit (see longer post here about that) and I wanted to pay closer attention to diet and performance while training for this meet.

With the support of Anastasia and Ten, I was able to drop almost 10kg, while adding 10kg to my total! My overall stats were:

This means I added 44 points to my Wilks basically by dropping 10kg and maintaining my strength! And I’m getting closer, little by little, to being able to qualify for raw nationals in the Masters-1, u57kg category! 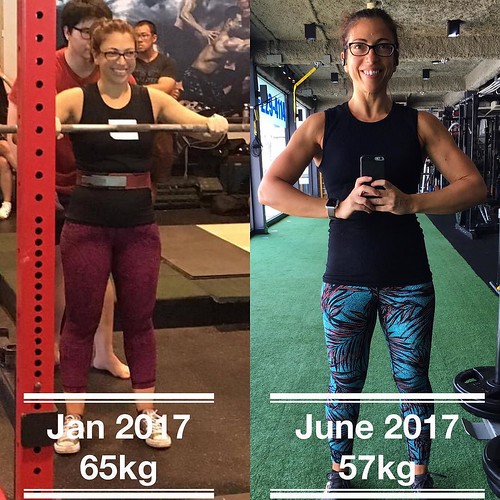 While this was a great process, and I’m glad I did it, it was definitely an added stress. When people say weight loss isn’t linear, they’re not joking. Towards the end of my competition prep, I was regularly under 57kg (the max limit for the weight class I registered for), but my weight would fluctuate by easily 2kg between several days. I weigh myself every day, and the week before, I was up over 57kg several days in a row. Cue: panic.

I knew that I would make weight instinctively, based on the trends I had seen during my cut, but I literally had no data-backed evidence about which exact days I would weigh the right weight. I’m still not exactly sure what causes my weight to fluctuate so much, to be honest. It doesn’t matter on a day to day basis, but when you have a two-hour weigh in for a weight-based performance event, you have to know you’re going to hit the right weight on the right day.

Now that I know what the process is like, I would definitely consider doing it again. I feel much more comfortable at this weight now, and having the deadline helped me focus – both for my lifts and the end of my cut – especially during the summer holidays (a time when I would normally “cut loose” a little food and training).

I think it would be a lot less stressful the second time around, and I would be less focused on consistently hitting a certain weight, and more careful about what I eat the days leading up to the meet – in the end, that was really all that mattered (less sodium, very few carbs, lots of water, and finishing my meals early in the day). I don’t think I’d be up for a water cut, but if I was within 1 or 2kg, that’s actually probably significantly easier than a long slow cut.

I like the concept of saving your PRs for the platform. I want to be able to set PRs in competition, not in the gym. But so far, no luck! I had plenty of meet PRs this time around, but only one of them was an actual PR. In retrospect, I think one of my biggest stumbling points was in thinking that my third attempt was a YOLO attempt – not really important, just more of “let’s see what I can do”. Instead, I need to shift my mindset to the PR being my focus, and the first two attempts should be almost a warm-up. I have a lot more I’ve been thinking about in terms of mindset, but that’s another post…

I had made so much progress on my squat this cycle that every attempt was a comp PR for this meet. And, even though I got called for depth on my third attempt, I was really pleased with how that 100kg felt. I knew it was too shallow as soon as I started standing up, but it was the fastest and strongest that weight has felt yet. I know I have more in me, and I know I need to focus my training on hitting depth every rep so I don’t have this problem in the future.

I knew I would not hit my previous max of 55kg on bench this comp. Not only because I weighed significantly less, but also because it was clear in training that bench had gotten weaker during my cut. Plus, I was so focused on improving my squat and deadlift, that I didn’t give bench a lot of love. Regardless, I’m really pleased that I was able to come back from a failed second attempt to hit a solid 52.5kg on my third attempt. I’m also pleased that it was only 2.5kg less than my previous max. This is also an opportunity for a mindset shift though – I really didn’t even think about trying to hit anything heavier than 52.5 because I thought I wouldn’t make it. In retrospect, I keep thinking about the saying: “Whether you think you can, or you think you can’t, you’re right!”

The only lift where I’ve ever successfully hit a PR in comp! And I did it again this time. I am especially pleased with this 110kg second attempt because I got lost in my head and was waiting for a pull command for at least 15 seconds before the judge said, “whenever you’re ready” and I remembered to just *pick it up*. Honestly, I think that threw me off a little bit for my third attempt, and by that time, I was just pretty wiped.

I am really pleased with how this meet went. I didn’t know exactly what to expect and I was a little stressed about training by myself (without my coach) for my strength and peaking blocks leading up to this meet, but I learned that I can do it!

Wow. I knew that a meet in the US would be different than one in Thailand – for many fun and interesting cultural reasons, and mostly because the meet I participated in here in Bangkok was the first ever so they were just learning how to run them. But, wow. Gleason Performance Training and USAPL are a powerhouse team. This meet was just SO. WELL. RUN.

I could probably write a whole blog post on how well organized this meet was, but I’ll just list my highlights:

Pretty much the whole time I was suuuuper jealous of all the lucky powerlifters that get to train at Gleason and compete with USAPL anytime they want!

I learned so much from my first competition, and this one was no exception!

EAT: Why can’t I learn this lesson? Last meet I didn’t eat enough and I made the same mistake again this time. I think I get nervous and don’t realize how hungry I am. Either way, I need to eat more during the actual meet, just to keep energy up so I’m not flagging by the last deadlift attempt. This time I brought:

Set Up Properly (for each lift): Knowing that I only have one minute to set up for each lift somehow makes me super stressed out (because obviously I can take as long as I want in the gym). But one minute is PLENTY of time. I’m literally writing this down so I remember it for next time. I did not feel rushed for a single lift, but I did psych myself out a little bit during bench because I could physically see the clock ticking down. 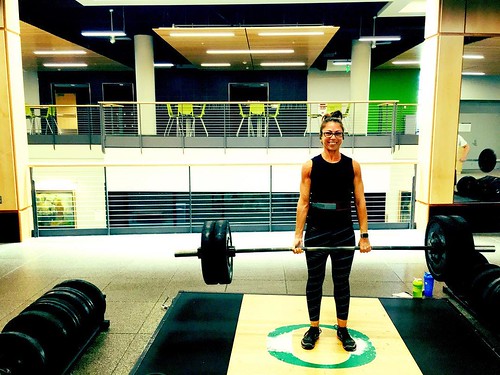 Focus: As much as I enjoyed making so many new friends at my first meet in Bangkok, I was not focused. I was socializing, watching, having fun. And all of that made me really really tired, and less able to focus on my lifts. Because there wasn’t enough time to socialize at this meet, I just had to go in, perform the lifts. After my flight was done, I could relax. I feel like I was much more in the zone during this meet, and that I was really mentally prepared to lift for each attempt. In the future, even if I have a long meet with lots of delay between lifts, I will make more of an effort to settle myself and focus before each lift.

Goals Work (For Me): I really appreciated having a specific date and goal to work towards. Although it was a little stressful to have both nutrition and performance goals at the same time (for the first time in my life), it was much easier to stay focused and on track all summer because I had a deadline. Before I started, I wasn’t sure if it would be overwhelming or motiving. Turns out it was super motivating for me!

For my first meet in Bangkok, I was going just for fun, just to see if I even liked the atmosphere of competing. I didn’t really worry about my weight or my numbers. For this meet, I was a little more serious. I wanted to hit certain numbers and I had to hit my weight class in order to compete (although I found out later that they are more flexible on that rule for local meets than the actual rulebook indicates). For someone who has never competed in any sport before (except to perform as a dancer growing up), the pressure was definitely there, but it was a good pressure. I will compete again, for sure! 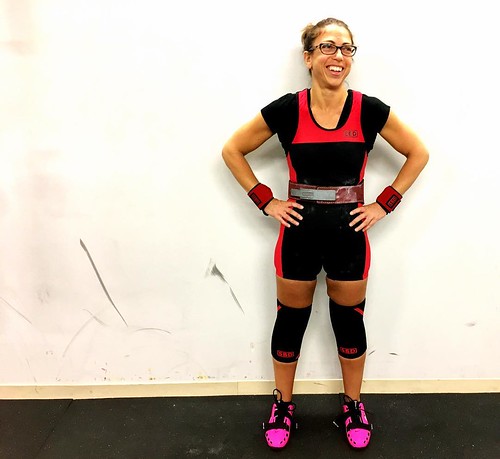 Make Your Weakness Your Strength: I haven’t been powerlifting long enough to really know how to identify my weaknesses for each lift, and what to do to address them, but I’m starting to learn. My goal for this next training cycle is to focus in on my areas of weakness and turn them into strengths. Based on feedback from all different places, I’m working on developing my quads (primarily for squat), triceps (for bench) & upper back tightness / engagement in all lifts.

Every Lift is the Same Lift: Sometimes I’m guilty of warming up with the bar too quickly, and not building the habit of approaching the bar consistently. I need to work on treating my warm up like a heavy single and my heavy singles like my warm up. I know that getting into the right mental space each time I lift, as well ensuring that my set-up is identical every time, will help me be more consistent in my performance.

Performance Is Not Training. (And I like it): I have never competed in a sport before powerlifting. As a child I performed in dance recitals, and I was a cheerleader, so I generally get the difference between practice and performance, but this is something different. I love lifting in the gym and I love lifting in competition.

It has been interesting to learn and experience that a competition is your demonstration (or performance) of your skills. It’s not learning. It’s show up and execute. There’s no do-over, no re-racking, no-second chances. I love that you show up and perform, and that’s it. It’s stressful, fun, empowering, and exciting and scary all at the same time!

I’m not sure when my next competition will be. I hope I have a chance to compete again in Bangkok before the end of this academic year, but for sure I will register for another meet at GPT in the summer of 2018! I’m already excited for it!