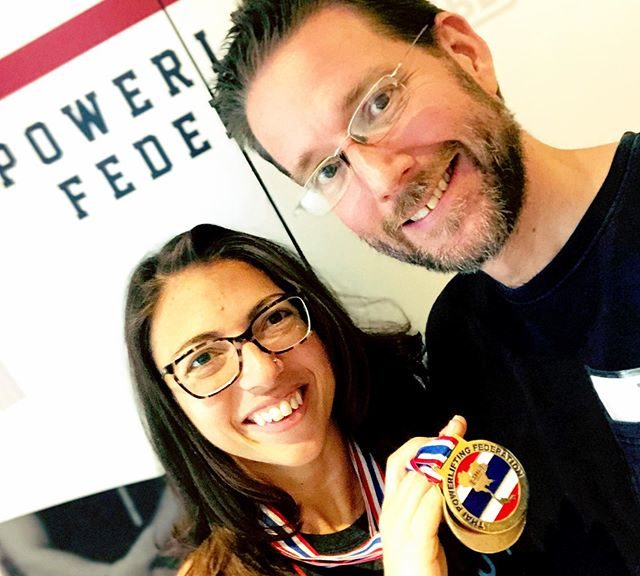 Well, that was *not* how I planned for this day to go, but I learned a *lot* of good lessons and hopefully will be a better competitor for it in the future.

However, it was *far* from a perfect day. Here’s how it went:

😱 Overall: went 6 for 9 😳 for my actual worst meet ever in terms of lifts made & #whitelights.

🥳 Buuuut, bringing my total to 315kg included adding 2.5kg to my squat for a new meet PR, a matched bench PR, and adding 15kg to my deadlift (helllllooooo #sumo!). So despite it being a bit of a roller coaster 🎢 of a day (see details below), still pretty awesome.

1️⃣: 110kg ⚪️🔴🔴: apparently I never got the rack command. I definitely held it after completing the lift, but I have no memory of anything related to the command. I think I was just suuuuper nervous and missed it (this was my comp max a year ago, so it was a little scary as an opener).

2️⃣: 115kg ⚪️⚪️🔴: I risked taking my planned second because I knew I only missed the first on a technicality. I was so nervous about missing the rack command again, I didn’t take my eyes off @_jobjubjub_. This moved much better than I expected so I took a big jump for my third. Broke my old national record for M1 & hit a 2.5kg meet PR for me.

2️⃣: 60kg ⚪️⚪️⚪️ Fine, not super speedy, but much easier than last meet. Tied meet PR & my own national record.

3️⃣: 62kg: 🔴🔴🔴 Tried to get fancy with the 62 after my experience with squat, and learned I know nothing. Should have gone for 61 or even 61.5 since this was also a national record. 🙄 Bench makes me crazy.

Redeemed myself on #deadlift: 3 for 3

🤯 It is SO HARD to make decisions about next attempts in one minute when you are so hyped up and nervous at the same time. Someday I want to compete with @teamgpt in person so I don’t have to think. Just lift. I 💯 trust that whatever he puts on the bar I can lift, I just don’t have his magic 🧙🏻. Last meet I picked all perfect attempts and went 9 for 9 with 27 white lights. This meet, not so good…

My big takeaway, after a convo with Ryan, is that whenever I’m breaking a national record (which I did with squat in M1, but could have also done for the open record, and I tried to do with the M1 bench record), I need to take the smallest attempt possible – instead of just going with planned jumps.

Even though I felt like the jump to 120 was solid for squat, I could have just as easily taken 116, nailed it and hold the open record until our next meet (and added a kilo to my total). This is a super easy “rule” for me to follow next time, much better than me deliberating in my own head about what I have left in the tank!

I CAN Get Aggressive

Last meet I realized I benefit from a little bit of (ahem) arousal during meets and I made it a goal to try to figure out how to bring my aggression to more of my attempts. I did a good job today, thanks to Alex’s super strong back slap before each attempt.

It’s About Having Fun

I get so set on certain numbers for each lift. I was so focused on hitting a double bodyweight squat (120kg) that I couldn’t even think about, well, anything else, really. It was such a big mental deal that I actually missed that first attempt on a technicality, which I have never done before.

And then, as soon as I was finished with squat I was totally relaxed and just having a great time. I was so stressed about squat, even for the weeks leading up to the meet, I don’t think I even realized or remembered how much fun I normally have at meets. Maybe that means I need to pick attempts that I am more confident in, even if they are lower than I might actually be able to hit. I had such a great time the rest of the meet, I want that to be the entire experience.

Last meet I had so much drama (remember this?) that I don’t think I realized how hard the whole peaking process is. Even thought I’ve done a few comps, I’ve only ever done an actual peak three times and I don’t think I really remembered or thought about how hard it might have been the first time around. This time I was basically lying down every moment I wasn’t lifting for the last 3 weeks of training because I was so exhausted. And I definitely remember being completely wrecked after the last meet, so I’ve got that to look forward to next week…

I have been working on mentally practicing my cues, and visualizing my lifts every day before I fall asleep or if I wake up in the middle of the night. I was able to use all my cues much more effectively both in training and my meet today becuase they just felt like the way I do things now, instead of being somehow both my own cues and external at a meet, like they did last time.

I Guess I Pull Sumo Now

Well that was kind of a surprise. I have a wonky right hip and we’ve been kind of shying away from sumo for fear of making things worse, but the weights have been flying up in training, and adding 15kg to one lift in 6 months is NO JOKE. So, yeah, I guess I’ve gone over to the dark side.

I was a little more stressed about deadlift than usual today, though, because I have learned that sumo is much more technical than conventional. When I pull conventional, I can just walk up to the bar, pretty much willy nilly, and just pull it.

But if I point my toes a centimeter out too far, or I have my hands too far apart, or I don’t think about pushing my knees out and keeping my chest up in sumo, the bar won’t budge. So I wasn’t sure if I could get all those cues right today for every attempt, but they all felt like cake. I am excited to see where this goes!

It’s Possible to Bring TOO MANY SNACKS

I think I brought more food than I normally bring on a 24 hour plane ride back to the US. I’m pretty sure I could have fed my entire flight… I have a problem. Next time: overnight oats, 1 kind of fruit (not five), a PB&J sandwich on white, and some gummy candy is all I need. I can pick up a bubble tea on the way in, and some pepsi zero from the 711 next door.

🙏 So many thanks, as always. Even though it’s an individual sport, I still feel like competing in powerlifting is a team effort, and I am so lucky to have such an amazing team!

As usual, @guentheralex killed it as my handler , videographer & general errand boy. @teamgpt programming is gold, plus he was messaging me & reassuring me from CT aaaalmost the whole meet (the 12 hour time difference doesn’t make things easy).

My cheering squad is the absolute best, @merilyn74 is hands down the loudest voice in the room every time and Jenny literally brought her whole family.

@thaipowerlifting puts on an outstanding meet every time, every single staff member & volunteer is gold. All of my competitors are awesome and I am so lucky I get to compete with such amazing people @nurkigurung@kkaelyzii@nokkyr & so many others! I love this community! Thank you!

When’s the Next Meet?

😵 As usual, I am both dead and can not wait to compete again. Bring on #tpf#nationals in Feb!