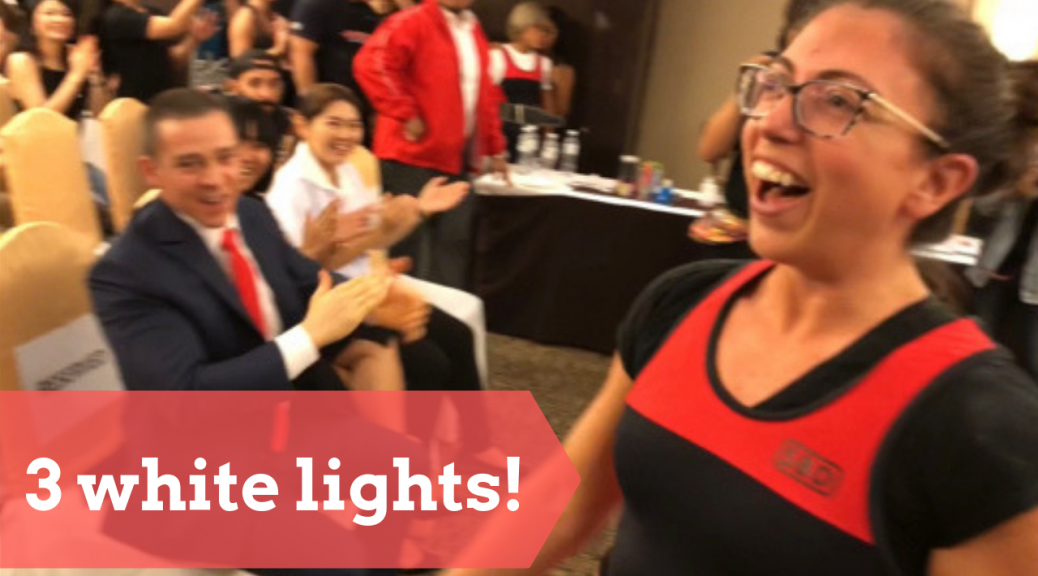 I also got my very own promo video, created by @creativekhru, thanks to the generosity of the Thai Powerlifting Federation!

Lessons I learned about myself today:

1️⃣ I need to focus on myself during comps. As much as I love meeting fellow lifters and chatting between attempts, I do so much better just quietly focusing on my next attempt. I was so “in the zone” I didn’t really see the rest of the meet (which sucks), but I’m so glad I was able focus and lift.

2️⃣ I am like a robot during attempts. I need to ingrain some better technique patterns for #squat because I just go back to my old habits as soon as I get to the bar.

Particularly for squat, I need to focus on keeping my eyes up (not down on the floor), pushing my knees out (duh) keeping my elbows tight and pushing my back into the bar. Every time I have a squat day I keep these cues in mind, but it takes so long to train new motor patterns, I think I’m only really making a little bit of progress on the eyes up so far… One step at a time!

3️⃣ I need more rest between #deadliftattempts when I train and I need to take bigger jumps. I was honestly not sure I had that 120, but @coachzcooper told me I did so I didn’t give up! I had so few warm-ups and so much rest between attempts and I still pulled it. Need to practice that more during training.

Side note: I know it looks like I planned all those attempts to hit all of our new national records, but I didn’t even know what they were (and I *really* wanted to hit a 60kg bench this time around). I know these records won’t last long, but I’m honored and proud to be the first one to sweep all three lifts for M1 in Thailand!

4️⃣ Practice competing is so valuable. I was nervous, but not nearly as much as I have been in the past. Even if it’s just a regular training day, it’s worth participating in meets just to figure out what works for you on a comp day. I also find it oddly re-assuring to know that I can just go in and compete without any specific prep and still hit my numbers.

I’m especially appreciative of the superstar judging from the Powerlifting Singapore team. Not only did I take my ref exam with them at the last TPF meet, but when I hit my attempts with this crew, I know I’m lifting to #ipf standards!

4️⃣ I need to remember to EAT. I’m never hungry during meets but I do so much better when I eat. One of my new favorite things is bubble tea. I know it’s not food, but it’s chewy, it’s carby, and it’s delicious. I must have had 4 throughout the day. I also like fruit, crunchy crackers, and donuts.

One big change I made this past summer at my last USAPL meet was making sure that I ate a mini-meal (ie: more than a bubble tea) before deadlifts and I noticed it made a big difference. I did the same this time and really did surprise myself with how much I pulled on my third attempt. I am amazed at how much of a difference it makes!

Thank you so much @teamgpt for the perfect game day plan, @coachzcooper for the perfect cues in the moment & the technique adjustments I needed, @thaipowerlifting for hosting another outstanding comp, @peterluc__ for the best spotting ever, @merilynw74 for being my cheering squad, and @guentheralex for the handling, videography and support all day!

I. Love. This. Sport. So. Much. Can’t wait to get back in the gym and see these numbers move up!

One thought on “Meet 5: My First Thai Powerlifting Federation Meet”